I wanted to share some details on the U2F Project now that it has been on the market for over a year now. This is to give an idea of what to expect in terms of cost and profit from a "DIY-to-market" kind of project like this.

For those unfamiliar, U2F Zero is an open-source secure USB device used for two factor authentication. I made it back in 2016 and did a semi-large PCB-A run and sold them on Amazon.

At the time, I didn't really know what to expect. Were people actually going to buy these? Was I going to get bad reviews? Was someone going to find some security bug in the implementation (open-source)? Is the profit worth the effort? Now I can answer all of these questions.

I started on U2F Zero because I wanted to work on something interesting and learn how to make a PCB. Here was my first one.

It's poorly laid out. The traces don't give a crap about EMF. And what's a ground plane?

Eventually, I got better at it. The project even got an awesome pull request from Chris Pavlina, who is better at layout than I am.

Eventually, I got the U2F Zero "minimum viable product," and it was ready to hit the market. 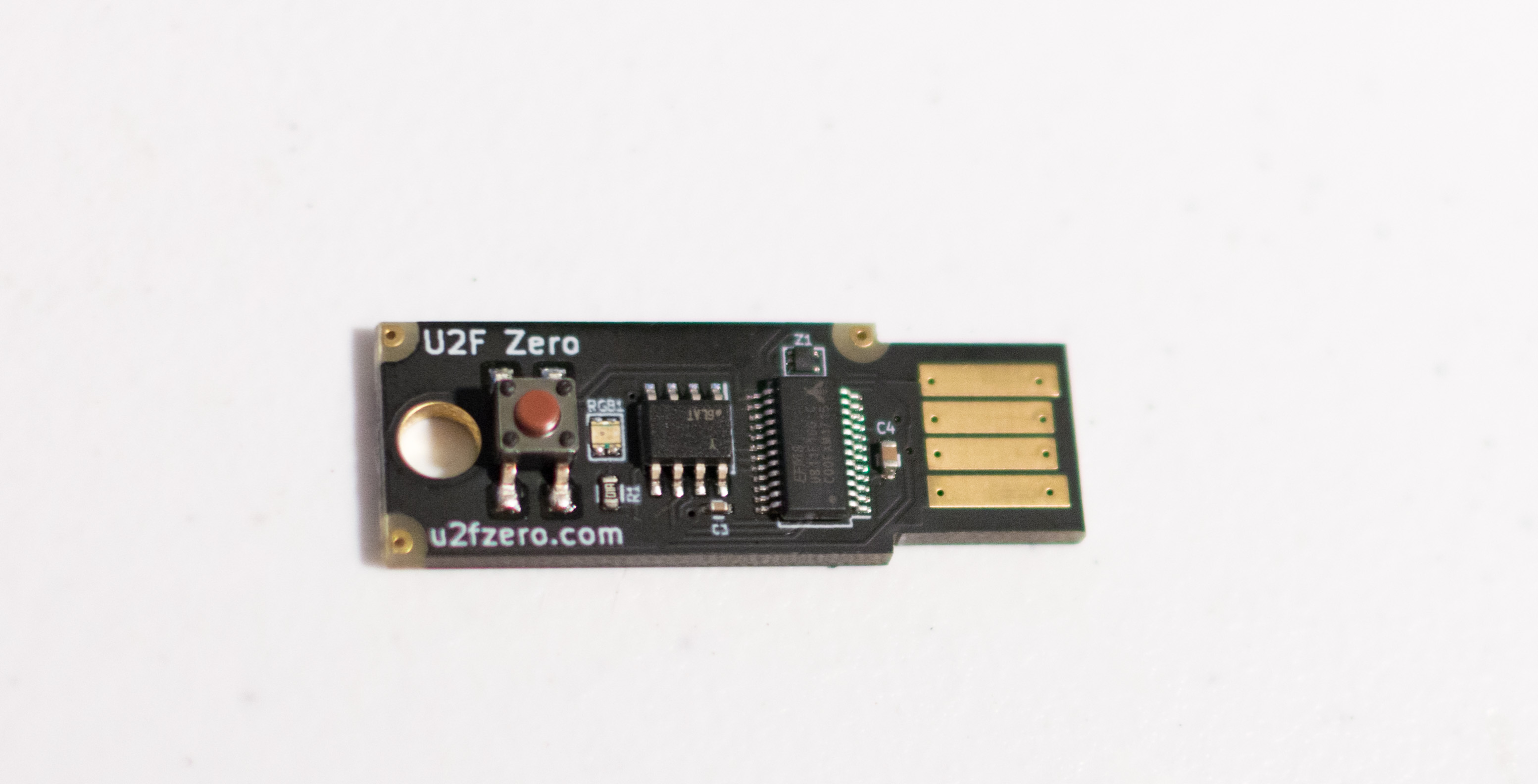 I didn't want to deal with sales and distribution. I was in the middle of grad school and didn't have the time or the interest. So after manufacturing the tokens, I shipped them to Amazon to be fulfilled. This does come with a cost, of about $1.02-$2.02 in fees per U2F Token sold by Amazon.

After manufacturing and distribution was handled, it was time to execute my elaborate market entry plan: write a blog post and post it to Hacker News and Twitter.

I spent almost a whole weekend drafting my U2F Zero post. I posted it... and it worked.

For the first month, the time between the Amazon shipment and the blog post, there were almost no sales. Then after the post, there was a spike of 207 sales over the following week. Then it balanced out to about 6-7 units per day. And 4 months later, they sold out.

There was even an increase in sales around Christmas time. 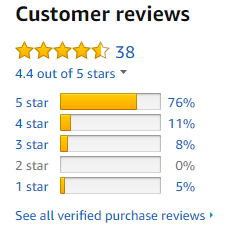 And people left mostly good reviews. I wasn't sure if people would leave good reviews since it's just a cheap token with no case. But it's very clear from the listing what it is. So most people will know what they are purchasing -- and as long as it does a good job fulfilling that image -- it has the potential for good reviews. I think that was an important takeaway.

I did get some negative feedback. Some customers didn't like that Firefox didn't support U2F at the time or that the token didn't come with instructions.

There was one technical review that tore U2F Zero to pieces. Amongst the issues the reviewer found, there was privacy issue in my implementation. Not a critical security flaw, but something that would allow each U2F Zero to be uniquely identified when it is used. It was my mistake and there was roughly 1000 units out there with it. I ended up fixing it and am offering replacements for those that purchased an old token.

The reviewer kindly took to opening issues on Github and even updated his review after the firmware issues were fixed.

As mentioned previously, each token cost about $3.00 to make. But when accounting for the cost of prototyping, packaging, labeling, import taxes, tools, and holding 100 units in stock, the unit cost is really about $4.18. There was about $2.02 in fees from Amazon. The listing price was $8.00. So that works out to be roughly $2k in profit over 4 months which is about a 42% ROI. Not a drop-out-of school kind of haul by any means, but it was a great experience for me and I hope to make similar ventures in the future.

Other opportunities and events

There were some cool unexpected things that happened as a result of U2F Zero. A lot of awesome people reached out or shared how they made their own U2F Zero(s) or purchased them on Amazon. 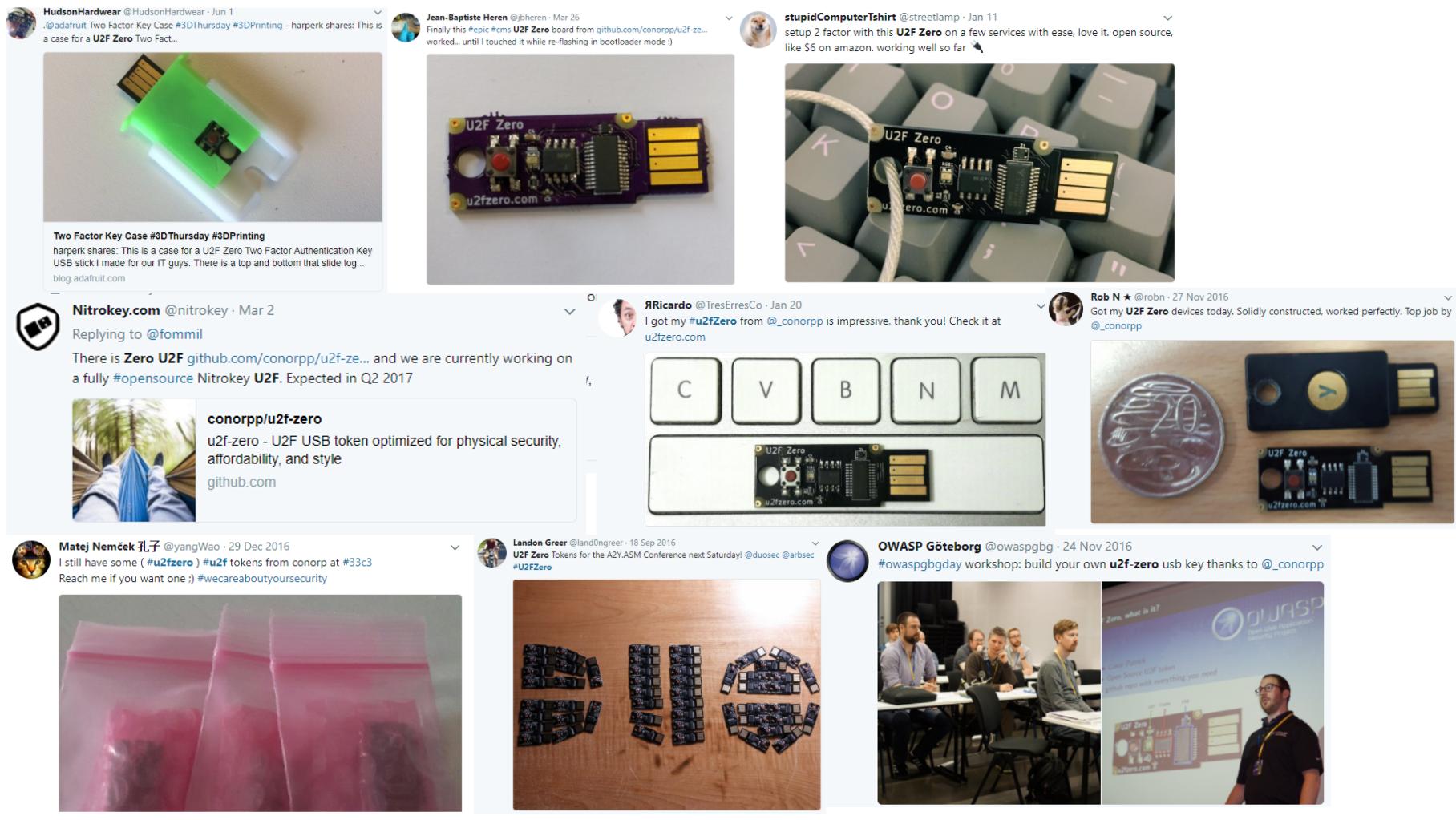 One of which was Landon Greer, who helped organize an infosec conference and made custom U2F Zeros as a conference badge. Later, the Crypto & Privacy Village at Defcon forked the U2F Zero design and included it in their unofficial 2016 defcon badge. 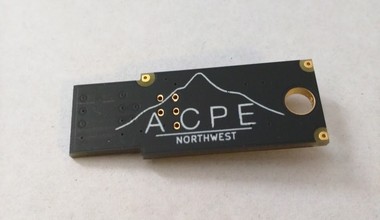 More recently, the Association for Computers Professionals in Education (ACPE) made a custom order for 400 units and invited me to come spend some time in Oregon and speak at their conference. I really enjoyed it. It was great to learn about a different field and meet new people.

A few months after selling out, I decided to do another run. This time I added some improvements to the PCB layout and fix issues in the firmware. I also decided to order 3000 this time (saved that $0.35 per unit) and support markets in Canada, U.K., and Europe. I think the U2F standard is picking up in popularity so the U2F demand shouldn't go away. I'm curious to see how U2F Zero sales differ between different countries. 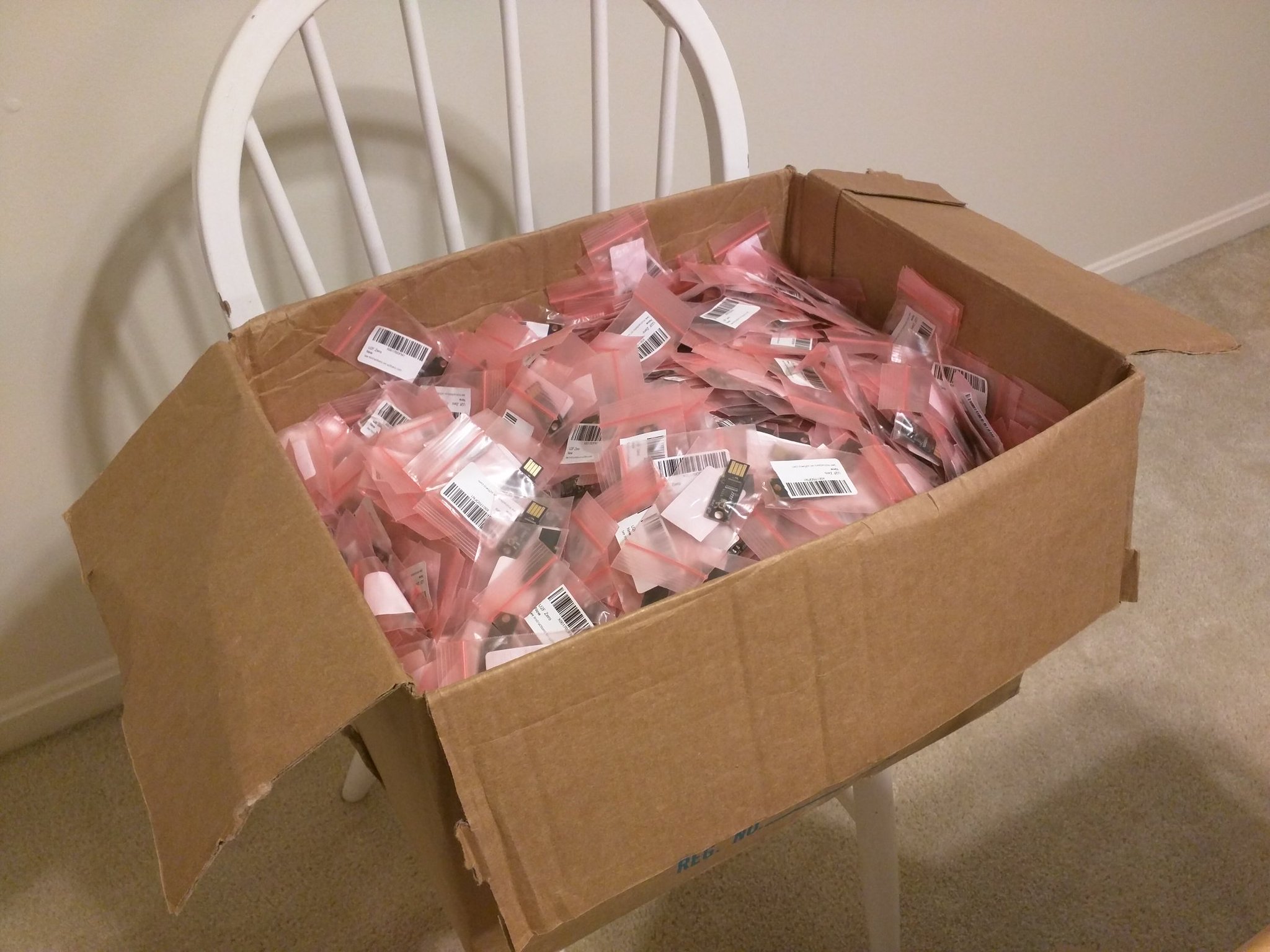 At the time of this writing, I've sent 1500 units to the U.S. marketplace, 300 to Canada, 300 to the U.K., and 100 to a distributor in Switzerland that will handle shipments to other countries in Europe. I've kept the rest in storage so I can replenish a marketplace easily if inventory gets low.

U2F Zero has been back on the U.S. market for about 4 months now, after being out of stock for about 6 months. Sales slowly picked back up and average about 5 units per day currently.

My goal is to keep the supply up with minimal effort and not have anymore gaping out-of-stock periods. In the meantime, I can work on the next project.

Thank you to everyone that has taken an interest in U2F Zero and to those that have contributed to the open source project so far:

Thank you to everyone that supported U2F Zero and made this possible. I've learned a lot since first making this crappy first prototype and will have more projects to launch later.